The two-hour ferry ride from Ocracoke to Cedar Island is peaceful and quiet; I enjoyed it more than I thought I would (and was able to finish some work sitting in the bed of my truck, watching the waves roll by). 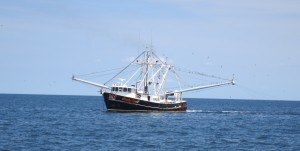 The landing at Cedar Island was other-worldly: Nothing there, except an abandoned motel. Unlike anywhere else on this drive so far, Cedar Island and the other small communities that dot Highway 12 between the landing and Beaufort feel like places that have remained relatively unchanged over the past several decades.

I pulled off of Highway 70 (which merges with Highway 12 somewhere between Cedar Island and Beaufort) to drive the length of Harker’s Island.

In addition to being, like its neighbors, a living and breathing coastal community with very few of the trappings of the tourist industry (other than a few housing developments right after you cross over the bridge), it is also home to one of the nicest discoveries for me so far on this drive: the Core Sound Waterfowl and Heritage Museum, which could easily be renamed the community attic of Carteret County. Within the three stories of this expansive building is the most complete and compelling visual history I have yet seen of what it meant to be a coastal resident in North carolina when family-run fishing businesses were the norm. The feature photo for this entry was taken here; I’ll let the rest of the pictures speak for themselves: 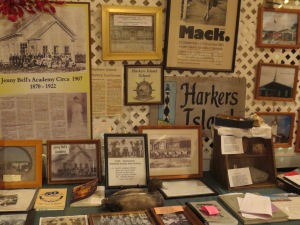 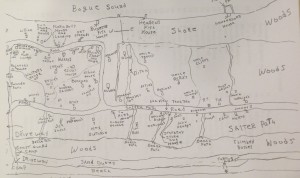 Upon reaching Beaufort, I immediately rented a kayak and spent several hours paddling up Taylor’s Creek and around the Rachel Carson Reserve. It is nice to be somewhere familiar today, if for no other reason than that I know how to maximize my time and find the hidden experiences that may have eluded me at my other stops due to my lack of local familiarity. 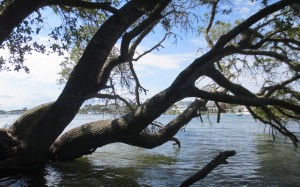 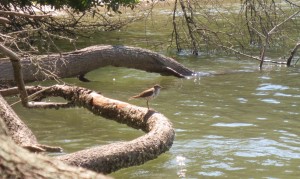 I realized last night that I probably should have been including daily notes about accommodations and food, in case anyone actually refers to these entries when planning a trip to the coast. I’ve corrected that here in this entry and will be adding the same thing to the end of all subsequent entries.

I’m also adding in my favorite drive music for each day.

Accommodations: Stayed with Cousins Ray and Jackie in a house in Corolla (A Dreamcatcher)
Dinner: Route 12 Steak and Seafood, Corolla — forgettable broiled scallops, but very family-friendly and not at all one of the standard mass-market seafood restaurants. Very patient server.
Drive music: Tim Fite, Change of Heart

Accommodations: Hatteras Marlin Motel — utilitarian, but fine for an overnight
Dinner: Dinky’s — At the recommendation of the front desk clerk; much better than a place like this (a bar/restaurant attached to a marina) should be. I had a very lightly grilled yellowfin tuna steak over tasty wasabi rice with mixed-grill vegetables; very good.
Drive music: Peter Gabriel, Shaking the Tree

Accommodations: Anchorage Inn — On the Ocracoke waterfront, and right across the street from sMacNalley’s, a popular waterfront watering hole. Within walking distance of most Village of Ocracoke destinations
Dinner: Back Porch — I asked the front desk person where she goes for dinner, and she said Back Porch. Sat at the bar and was delighted to be accompanied only by year-long residents (including an Ocracoke teacher). Great bartender, too. Tuna again, and it was delicious, with rice (another home run rice night; go figure) and spinach.
Drive music: none; ferry crossing is only 45 minutes, and there was very little driving beforehand or after

Accommodations: Inlet Inn — A Beaufort safe bet; splurged on the waterfront room. Got the corner suite; very nice.
Dinner: My favorite bottle shop, Queen Anne’s Revenge, was closed (huge disappointment), so after a mediocre dockside experience at Beaufort Dockhouse (more cigarette smoke and less positive vibe than in years past), I ended up at Blue Moon — a standard for me, I know, but who can pass up trigger fish (the hidden treasure of fish) over cheese raviloi? They also made a caprese for me off-menu — thanks, Shelly. Very pricey, but very good.
Drive music: Mark Knopfler, The Ragpicker’s Dream

One thought on “Walking in their Footsteps”