It’s raining now as I type this, as it has done all week (though, as I think most of my posts convey, the rain has not been entirely unpleasant — just constant), but for one glorious period of about three hours today, the clouds and rain gave way to pure, unfiltered sunlight — a welcome way to end this third DriveNC drive. As I listen to the rain hitting the roof now, I am reminded of the Ray Bradbury story, “All Summer in a Day” (still under copyright, so find the full text on your own) in which the protagonist, a young girl living on a planet with almost-constant rain, is locked in a school supply closet by her classmates on the one day of the year when the rain stops and everyone enjoys a few minutes of sunshine. I’m glad my schedule worked out so that, unlike the girl in the story, I had an opportunity to be out in the sunshine earlier today, even if only for a little while. 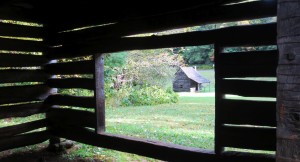 Time more than weather governed this final leg of my drive. I had to make my way back to Deep Gap and then to Taylorsville in nearby Alexander County by early afternoon for a work function, which left me with only about three hours available for today’s drive. At least half of that time was taken up driving between Deep Gap and Galax, Virginia, so there was little time left over for hikes and other roadside distractions. As a result, today’s drive was more about appreciating the vistas at some of the overlooks along the way — vistas that I could only imagine before now, since fog and rain had obscured nearly every long-distance view up to this point. An added bonus today was a result of driving from South to North — on the one clear day with constant sunshine, I happened to be along the stretch of the Blue Ridge Parkway on which the trees had begun to display their autumn colors. I’m not sure it will be evident in these pictures, but in some spots, with the sun striking rain-soaked leaves head-on, the color was stunning.

I was not the only one out enjoying today’s short break from the rain. With greater frequency than I can ever remember, a wide array of animals also was out in full force today, from wild turkeys to turtles to chipmunks to songbirds. I finally managed to surprise one wild turkey quickly enough near the Virginia border to get one decent picture.

School children were on the loose on parts of the Parkway today as well. When I reached the Blue Ridge Music Center, my planned turning-around point, I stumbled on a large group of elementary school children from nearby Allegheny County who were there on a field trip to learn about folk music. In the steady glare of sunlight reflected off of rain-soaked pavement, they learned to dance the Virginia Reel and other Colonial-era dances to music expertly played by a live folk band, complete with a caller.

Pressed for time, I drove home on Highway 221 instead of on the Parkway, and, though it is certainly a pictureque road in some ways, it is not the Parkway. Cruising down a “regular” highway for 90 minutes helped to bring home just how fortunate we are to have something like the Parkway in our back yards to allow us to experience an alternative to the more utilitarian roads that make up the bulk of our driving options. 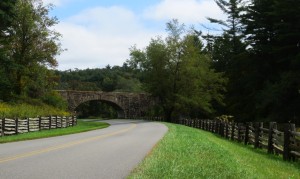 And what was the result for me of experiencing that alternative road this week? Overall, and perhaps not surprisingly, given the steady rainfall, I was reminded over and over again of how connected the most distant parts of our state are, by road but also by water. From the mountains-to-coast bikers in Brevard to the rushing creek at Graveyard Fields to the powerful cascades at Linville Falls to the maps at the Museum of North Carolina Minerals that trace the Eastward route of minerals mined in the mountains to the rain running off my roof in Deep Gap, everything flows from West to East, downhill from the lofty heights of Mount Mitchell and its neighbors toward the Piedmont and the Coast. We are what we are as a state because of where we come from, and for the most part, everything in our state is in some way at least in part the product of runoff — in one form or another — from our mountains.

Another short one today due to time constraints (see above), but a good one. For as many times as I have come to Deep Gap and Boone, it is surprising that almost all of my time here has been spent looking to the South. Today’s drive took me North across Highway 421 for the first time in many years, and one of the first places I stopped was the E. B. Jeffries Park. A well-blazed trail descends rapidly down the mountainside to a quick mountain stream that in only a few yards becomes a really spectacular series of falls, fattened today by all of the runoff from a week of rain. 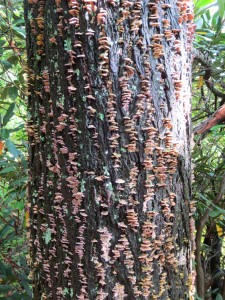 I met a very old dog on this hike (sorry, no pictures; she was very camera-shy) whose owner guessed that this might be her dog’s last time hiking this trail. The dog was clearly familiar with the path, suggesting that she had made the hike many times before, and, though her gait was slow and she stopped to rest every hundred feet or so, she clearly loved being there and was joyfully soaking up every minute of the short hike. I hope it is not her last hike to the cascades, but if it is, it was nice to see how happy the opportunity to make the trip one last time made her feel.

Dinner: Vidalia, Boone — Like so many other things in our state, restaurants in the West often are given short shrift next to the attention lavished on their Eastern cousins. I have sampled many fine restaurants on this week’s drive, and I was very happy to end on one of my favorites. I shared fried green tomatoes with my cousin, Ray, who joined me in Deep Gap today, followed by simple almond-crusted brook trout over sautéed green beans and peppers. Duck-Rabbit brown on tap.